The postman delivered me

There is always a story

There is always a story behind a genealogist! It’s there behind me too. Before I turn 77½, in approx. 20 years, I can not tell the whole story, but certain parts of it can be told now, and I do in the following. At that time, I probably can not keep up with (web) development any more and HTML/PHP has been abolished by something I can not keep up with learning.

I usually say that I started genealogy research to find my immigrant great-grandfather Wilhelm Rudolf Stegemüller. That’s right, but there’s also another reason. 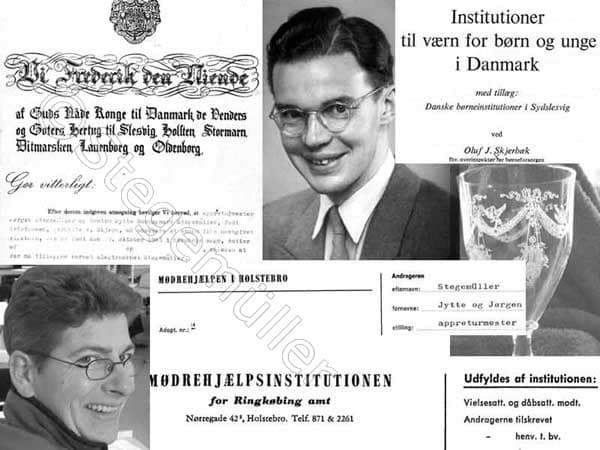 The following sentence by Hans H. Worsøe has always provoked me:

“Persons other than the ancestors themselves, eg stepmothers, adoptive parents, etc., do not belong on the board” (Politiken’s “Handbook of Family History” 2001, page 43).

I’m researching my adoptive family, because that’s where I feel I belong. This is where I know father, Jørgen Stegemüller, and mother, Jytte Baunsgård Kristensen, grandmother, Mary Christensen, and grandfather, Carl Frederik Kristensen, and have heard of grandmother, Karen Sørensen, and grandfather, Rudolf Reinholdt Felix Stegemüller. It’s from here, I have the memories I can photograph and exhibit in my web gallery, and it’s from here, I have anecdotes, robbery stories and gossip. But should I follow Worsøe, I should look around elsewhere; that’s because I’m not a real Stegemüller. I should have had a more common name. But blood ties or not, Worsøe or not, I feel like a Stegemüller! These are the ones I research, and I will continue to do so.

Adoptions are always shrouded in some mystery and there are many considerations to take. My motivation for telling my own part of the story anyway is that for myself it has never been shrouded in mystery, and that we genealogists do everything to find the story of others, but we do not tell our own. I tell the story to perhaps inspire you who may have been adopted yourself, to look for the case and perhaps close a few “holes”, and to show that it is not so difficult at all when you just get hold of the right one end.

I always knew I was adopted and it’s never been surrounded by secrecy. My Stegemüller family told me very early on that they were not my real father and mother, but that they had gotten me from an orphanage. They even always held two birthdays in my childhood: one the day they thought they had something to celebrate (namely the day they picked me up at the orphanage), and one the day I was born. When I moved away from home, I got a copy of the adoption grant with me. I have met my biological parents and they were nice people. There is, as it were, nothing more in it.

Help from an unexpected edge

The connection to genealogy and the internet is: I did not realize where I had been the first 2½ years of my life. My mother (ie my adoptive mother) meant to remember that they had picked me up in a big white house in North Zealand. Yes … there are relatively many of them. I tried over a period of 10 years through the Public Administration Act and the Public Access to Information Act to gain insight into my own adoption case. I would find it orphanage, but even as an educated lawyer time and time again I ran my forehead against the wall.

A county responded to my inquiry number two almost that “now they did not want to hear more from me”, and when I contacted the population register in a Jutland municipality (it could be that they had a previous address on me) they said that there had I never lived. Well, I remember when I was 4 years old I looked out the window from the landing at Park Alle in that city. But no, it was not thought that I had been registered in the population register. It became more and more strange.

A website about orphanages in Denmark appeared at the end of 2002. And I looked around a bit for orphanages in North Zealand in the early 60s, and for large white houses, but they were all large and white. I turned to Maria Rytter, who is the museum inspector and head of the site. She was sweet and helpful and thought she could narrow down my orphanage to two possible! She also put me in touch with another user of the site, who as a child had been in the same place as I might have been.

This user explained to me how she – via the rules of the Archives Act – had gained access to her own adoption case, and how much help she had received from a named employee at the archive. For me, it was a completely new approach to the case – I had not thought about the fact that my own adoption case could be together with attachment protocols and probates from the 18th century; after all, I’m from 1963.

I contacted the archive. It took a maximum of two hours before an incredibly helpful and warm-hearted archivist had found the case and told me how I could also find the associated paternity case that was on Funen. I asked to have it all copied and sent; and was willing to pay regardless of the number of hours spent for the archive staff.

Retarded or a member of “Mensa Denmark”? 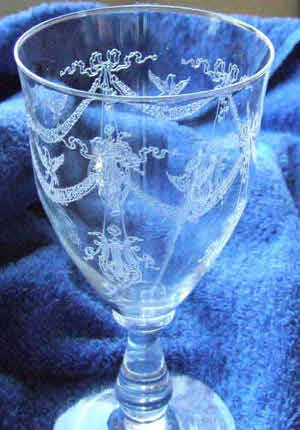 On December 17, 2002, I received the story of the first 2½ years of my life in the mail in a very thick envelope. I will never forget that date. It may sound strange, but it was amazing. Here were finally the documents I had been looking for for years. Here was the description of my adoptive parents, of the orphanage and of the biological parents.

The time at the orphanage was particularly interesting, for no one had been able to tell about it. My adoptive mother did not remember anything, they had “just” picked me up and got to know me one week before the pick-up, my biological mother had “just” given birth, and knew nothing further. Suddenly I could see that for the first 2½ years I had been admitted to Rigshospitalet’s pediatric ward for six months because it was thought that I was “mentally and motor retarded”, because I was so strangely lethargic and limp. Initially, my adoptive parents only received a care permit, because it “will be a bloody pity for the adopters if it (ie me, ed.) is retarded”.

Fortunately, there was a social worker at “Mødrehjælpen” who thought that “that child just needed an ordinary home and some parents after so far a stay in an institution.”

That night I took a large glass of red wine (or two) of grandfather’s (or maybe great-grandfather’s?) Crystal glass and looked once more at my membership card for Mensa Denmark. It was now a little strange to suddenly have these two strong opposites in black and white. But retarded – I’m not.

My desire to go to the orphanage “Dear Home” in Hellerup was great, but I controlled myself and waited until my adoptive mother could come in the summer of 2004. Today there is a nursery, and we were allowed to come inside. The first thing my mother said when we stood in the stairwell looking at the ugly brown panels was, “These are the same panels,” and she could point out exactly where my dad had parked the car on the day they picked me up and where my bed had stood. Personally, I did not feel anything about the place as such – except that I am incredibly happy to know where in the world I came from. A hole was closed.

What made the impression, however, was that we went down to a very nice lady in the kitchen, who turned over all her cupboards and drawers for 20 minutes to find one of the old orphanage towels for me. And she found one that I was allowed to get. “Dear Home” is embroidered on it with red yarn. That way – and with a stack of records copied for DKK 2,000 – I can remember my own first 2½ years.

That was my story, and it was the one that opened my eyes to the bliss of archives, archives, and the Internet. We can not all come with the stork! So I came with the mail.