Du er her: Start1 / Grandma and the alimony cases

Grandma and the alimony cases

I had a wonderful grandmother: a smooth and warm-hearted little woman, where there was always room, and who patiently played “Rummy” for hours. I have spent many summer holidays with her and it was lovely weeks. I could entertain myself for several days playing “ring games” cutting out the old weeklies, which were “Familejournalen” and “Hjemmet”and playing grocery store, with the effects Grandma brought with her from the shops she had worked in (e.g. a grocery scale, bags of ground beans. Sand and pebbles could make it out of the beans). I have been so lucky that by far most of my childhood, we lived not far apart and the contact was intense.

In the family, we always knew we did not know who were the fathers of her first two children:

This glimpse of the story is therefore partly the story of these two – unknown – fathers, partly a bit of guidance on how to find paternity cases/cases about alimony contributions.

It is several years ago that I found that the church records did not say anything about the fathers of the two children. In connection with the boy’s baptism in Starup, there was a remark in the church register which surprised me “Birth reported to Kalundborg”. Kalundborg church register was now blank at this point. Hrm … what could that mean?

It dawned on me yesterday, where I found out about the girl’s father by asking to see Holbæk County Journal first (+ register). A little leafy in 1928 and suddenly Grandma was standing right there. A journal group and a number were indicated in the journal. New order form: “Holbæk County” as archive creator , title: “Journal cases, journal group 14 + case number” + 1928. I could probably have contented myself with writing “Holbæk County”, “Journal cases” and “1928”.

The package came out, and then it was just a matter of flipping through the case, and suddenly the name of the girl’s father came. The guidance sheet from the archived states that you must look for paternity cases where the father is presumed to be at the time of the decision – and that is extremely logical. OK – then “Birth reported to Kalundborg” suddenly made sense – it had to mean that the father had to be found in the county that Kalundborg was a part of, and it also happened to be Holbæk.

Once again, I must state that it is not at all that difficult to find anything in other archives than the most common – but that I always go a little humble to the task, because I expect it is difficult. But success gives courage to more – so I just tried the boy today too! And there were bites.

Now Aunt Margith and Uncle Hans have known fathers, and a few “Unknown” have been deleted from the database. The next two sections are excerpts from the cases. That it is the reason not everything is translated.

The contribution case regarding the girl

Unmarried servant Mary Christensen, Ellinge Lyng, Højby Municipality, turned today to me and requested that Commissioner Axel Larsen, Egebjerg was designated as the father of the child, as she waits to give birth in the beginning of July month this year.

Mary Christensen, who named herself as stated, explained that she was born on 8 February 1910 in Ellinge Lyng, Højby Parish, Holbæk County, baptized and confirmed in Højby Church. She is the daughter of painter Niels August Christensen and his wife Anna Karoline Marie, b. Carlsen, who lives in Ellinge Lyng.

She, who was brought up in the home where she stayed after the confirmation, has since then supported herself as a maid. Last summer she had a place at the bakery in Nygaard, Højby Municipality, until 1/10, after which she came home to her parents, where she still lives.

Regarding her financial circumstances, she explained that she does not own any fortune or has an inheritance pending. She earned last summer, 5 months , DKK 30 per. Md. in addition to board and lodging, but at present she is without profit.

./. She claims that she is 7 months pregnant, which also shows attached pregnancy certificates. Her municipality of residence The one-month day before the birth is thus Højby Municipality …. (here a little text is missing) … must be interpreted as the father of the child with whom she is pregnant. She has known him for approx. 1½ years and the last year they have had regular intercourse when they were together. She asserts with certainty that in the said year she has not had intercourse with other male persons than him, so that only he is the father of the child. She therefore wishes him obliged to provide maintenance to the child from its birth, and to contribute to her maintenance 1 month before and 1 month after the birth and to the maternity leave with a total of DKK 60, depending on the authorities’ further determination.

She, who has gone unpunished, has not been pregnant before, and she still stays in the home at Ellinge Lyng.

./. A baptismal certificate is attached to the Case.

In connection with the above , the undersigned has today approached Indklg., Who named himself Niels Aage Axel Larsen and explained that he was born in Marriage on 13′ April 1906 in Nykøbing S., baptized and confirmed in the Parish Church here. He is the son of Kusk Niels Peter Larsen and his wife Nicoline, b. Svenningsen, who lives in Nykøbing Sj. He was brought up at home, where he stayed until 1 January 1926, after which he had a place in Egebjerg Grocery store.

After graduating, he learned the trade subject and is now Commis at Købmand Nielsen in Egebjerg. He is unpunished, is not Alimentant, has never received poverty relief and considers himself entitled to maintenance in his municipality of birth.

Regarding his financial circumstances, he explained that he currently earns DKK 65 per. Month in addition to board and lodging. He had the whole of last year …. (here a little text is missing) … Regarding the case, he admits that he has been in relation to Mary Christensen at one such time that he is the father of the child, as she waits to give birth. He therefore offers to provide maintenance to the child from its birth and to contribute to the maternity leave, to her maintenance 1 month before and 1 month after the birth with the normal contribution for Holbæk, depending on the authority’s further determination.

He was made aware of Alimentanters’ Off- and Registration obligation as well as the Penalty for Failure to do so.

./. A maintenance report is attached.

The contribution case regarding the boy 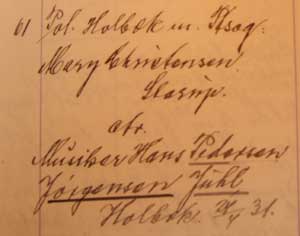 Musician Hans Petersen Jørgensen Juhl living in Holbæk born on 23 June 1902 in Lunding, Sd. Starup Parish, Haderslev County, is hereby obliged, with the coercive measures provided for in the Legislation, to pay maintenance to the boy born by Forward Mary Christensen of Starup on 11/4 1931 out of wedlock, for whom proof of name is not available, from its birth.

… As a contribution to the mother’s maternity expenses and to her maintenance for one month before and one month after the birth, an amount of a total of DKK 60 is paid, which is due immediately …

./. Return service strange Police Office in Kolding, as noted, that in this endorsement mentioned certificates by Request now I forwarded to that and follow Enclosed case back. It is stated that the Child is currently with the Mother at Magnus Petersen “Starup”.

Possibly Hans Petersen Jørgensen Juhl was Grandma’s great love – because when she has to give an explanation for so-called “Schematic interrogation” with the police, she describes him as “Bandmaster”, while both the police and he himself indicate the position of “Musician”. From the other parts of the case, it now also appears that he has a somewhat tarnished past, and that he seems far from being able to call himself “conductor”.

Grandma has given me two amazing days at the archive to find the cases. My image of her has not changed, but may have become a little more nuanced.

It is not difficult to work with the alimentation cases. Try it yourself. It may be you find something no one knew